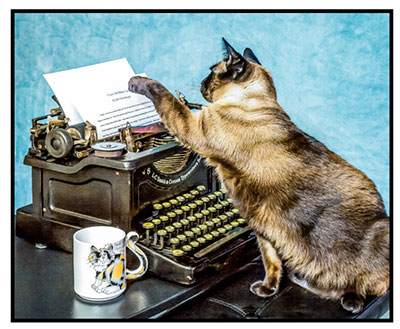 Coco puts pen to paper; that is, paw to pad (typewriter keypad):

Tuesday of this week (February 14, 2017), Channel 2 news interviewed a small boy, one of the Oroville Dam evacuees, who shared his heartbreak at having to leave his dogs behind.  Fortunately, the evacuation order was lifted Tuesday evening, and the boy is now hopefully reunited with his pets.

During Hurricane Katrina, national news covered a similar image of a small New Orleans boy crying after having to leave behind his beloved dog Snowball.  Thanks to Congressmen Tom Lantos (D-CA) and Christopher Shays (R-CT), the Pets Evacuation and Transportation Standards Act (PETS) — Public Law 109.308, an amendment to the Stafford Act — was passed by Congress on May 22, 2006, by an overwhelming majority and later signed into law by President Bush on October 6, 2006.  It’s my understanding that failure to allow evacuation of pets from an emergency area may put FEMA funding into jeopardy.

REQUEST:  Please educate the responsible authorities in the Oroville area that arrangements MUST be made to allow evacuating families to bring their animals with them.  This MUST include appropriate communication with the families so that they know they are allowed to do this.